OUR NEXT #TDFUK FACULTY ANNOUNCEMENT IS…
VIKAS ARUN

Vikas is a dancer/choreographer from Seattle where he trained at Premiere Dance Center and the Alchemy Tap Project under Josh Scribner, Melissa Farrar, Carolyn Farrar, and others. At age 16 he was featured in Dance Magazine after winning Jared Grimes’ “Run The Night” alongside Josh Scribner. He then moved to New York to pursue a Bachelor’s Degree in Engineering at Columbia University while cultivating his dance career.

Since moving to New York Vikas has established himself as a sought after contemporary and tap dancer. He has had the pleasure of assisting Anthony Morigerato, Jared Grimes, Ted Louis Levy, and many others. He has appeared on So You Think You Can Dance, worked on the Drury Lane Theatre’s production of 42nd Street, performed for esteemed Root Magazine guests such as John Legend, and danced in the upcoming film Breaking Brooklyn. He is a member of Chloe Arnold’s Apartment 33, Cat Cogliandro’s CATastrophe!NYC, and is proud to be the first South Asian ambassador for Capezio.

Additionally, Vikas travels the US and the world consistently to teach classes and set choreography. You can catch him traveling with Celebrity Dance Conventions, Portland Tap Alliance, and Motor City Tap Fest, among others. He has been noticed for his artistic and unusual choreography which has been called “refreshing” by Tessandra Chavez and “beautiful” by Jason Janas. He is honored to have a small role in training the next generation of dancers and constantly strives to bring his energy and passion into the classroom.

See which classes Vikas is taking. 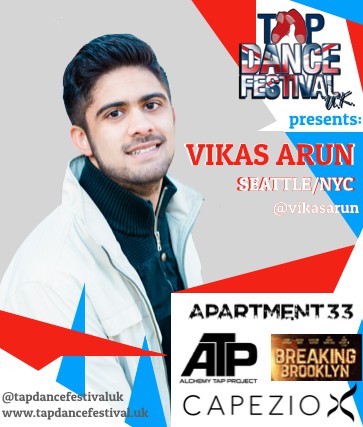