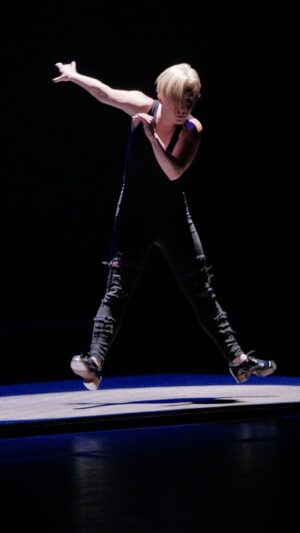 Robin Passmore has devoted her life to the art of tap dancing. Robin is the highly regarded and respected Dance Captain of Chloe Arnold’s Apartment 33. Robin is not only an accomplished performer having performed alongside Chloe Arnold’s Syncopated Ladies and Jared Grimes Broadway Underground, and she is also the Artistic Director of her own Dance studio and company in New Jersey, USA. Passmore Dance are well known in the US competition world, and were recently featured on cult US TV Show ‘Bring It On’.

Robin is delighted to be attending TDFUK as a performer and Faculty member. Catch Robin’s fiery footwork in action during the Apt33 Professional Showcase on Friday 16th February and then again in the Student / Faculty Showcase on Sunday 18th February. Robin will be responsible for cleaning up our footwork in her technique classes all day on Saturday 17th February… Not too be missed! It’s Tappening!